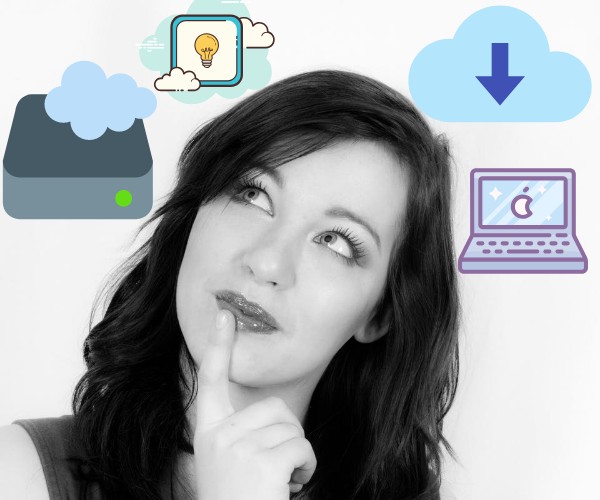 No One Understands the Cloud

In the comedy movie “Sex Tape” with Jason Segal and Cameron Diaz, there is a scene where they fight over the fact that some salacious act that they recorded on their iPad was accidentally uploaded into the “cloud” and was shared and seen by all of their friends and family.  In this scene, Jason Segal’s character pointlessly argues with his wife and screams in vain, “Nobody understands the cloud!”  Truer words have never been spoken. That was 2014.  Five years later, I still think that to be true. In this article, we are going to attempt to uncover the details of what the “cloud” is really all about… Read along if you want to learn more…

What Exactly is the Cloud?

The “cloud” is a network of computers that provide a specific type of digital service to any user that has an internet connected device like a computer, cellphone, or tablet.

These network of computers and servers are located in multiple locations and are managed and owned by major IT cloud providers like Amazon, Apple, Microsoft, or Google, who provide “cloud services” to anyone uses them or any business who needs them.

Much like the concept of the “internet”, the “cloud” is ubiquitous.  We interact with them in different ways every day and while they are closely related to each other and have overlapping functions, one main differentiator of the “cloud” concept is that the user must be able to “upload” and subsequently “download” their data from the “cloud”.  So to oversimplify things, when you read the news from CNN on your laptop, you are accessing the “internet”, but when you add your photos on your Facebook account, you are uploading it to the “cloud” servers of Facebook.

Still confused?  Much like the chicken and the egg, we don’t want to conflate these two concepts, as we would be in an endless cycle as to which one came first and which one bore the other.  Instead, the “cloud” is a model for allowing users on-demand access to shared resources like storage, software, computing platform, and ultimately data.

As there are many different iterations and overlapping functions of the term “cloud services”, this article will focus on the most basic function which is cloud storage.  Other cloud-based services like cloud computing require an entirely separate discussion as they are too broad to discuss in one article.

Ten years ago, when we needed to store some personal data, we would save them on our computer hard drive, on a USB flash drive, an external drive, or even a CD or DVD disk. A lot of people still do up to this day and may continue to do so in many years to come.  But as most of our day to day lives have involved digitized information, we continue to store more data, and we continue to attempt to live efficient and flexible lifestyles and would want access to that stored information on an on-demand basis.  This is where the concept of cloud storage comes in.

Instead of having a physical storage device, like a hard drive, for us to transfer the data that we want to save, we now have an alternative “cloud storage” solution where we would normally pay, based on a monthly subscription model, for “storage space”.  The user does not have to physically own a hard drive, but rather, the user just rents out the storage space, much like renting out some real estate space, but in virtual internet space, if you may.

Most major providers actually offer some free storage space when you sign up.  It can go from as little as 2GB from Dropbox to as high as 15GB from Google when you create a Gmail Account.  If you want additional space, you can rent out for as little as $0.99 a month for 50GB (from Apple iCloud ) and up to 30TB from Google Drive for $299.00 a month.  Ability to add multiple users on a single account is a standard option for sharing and collaboration purposes.

Users can “upload” their data into this rented storage space, by connecting to the internet and accessing their account.  Subsequently, anytime a user wants to access or download the saved data, they may also do so by the same process.  Anytime a user runs out of storage space and wants to increase ( or decrease) their rented space, they may do so by just changing their account settings.  With this model, there is on-demand scalability and there is zero maintenance involved.  The cloud providers are responsible for the safeguard and accessibility of your data as they deploy redundant measures in case you need to recover your data.

Knowing that the cloud is a virtual hard drive that you can access anytime may not be entirely enough to fully grasp the whole idea.  That answers the “what” and the “why” but “how” it is backed up is another thing that can add to the confusion.  This can be summarized in two methods.  Cloud Sync and Cloud Backup.  The end result is the same but one is running on manual and the other on auto mode.

Cloud Backup runs in the background automatically. You set and forget.  Once the initial setup is done, the user does not need to take any additional actions.  Typically the user must set a specific and time and date for when the backup service gets activated, and once it does, it will automatically backup the entire system.  In case there is a system crash or data loss, all backed up data can be restored, including the operating system for mac or windows.  Companies like Carbonite, Backblaze, and SpiderOak are the frontrunners in this market.

In Cloud Sync, the user must identify specific folders and source drives that must be backed up. They must be manually added to the main folder that the service provider has designated as the source folder that will be backed up. After the initial setup, only those source folders and directories that were defined will be saved on the cloud.  These type of cloud services are the most commonly used in the market and amongst the most popular ones are Google Drive, iCloud Drive, Microsoft OneDrive, and Dropbox.

Companies that provide cloud services with a pay as you go pricing model can be considered as a part of the public cloud.  But you can also create your own private cloud.  This will mean that you will have to buy a network attached storage (NAS) hard drive. These are hard drives that connect to your local network rather than to your PC.  You can access the NAS drive from any device, and from anywhere in the world,  for as long as it is connected to the internet.  The best NAS devices are can also be accessed from any platform or operating systems. Unlike the typical hard drive which must be formatted for either Mac or Windows based usage.  Western Digital My Cloud, Seagate Cloud, Synology, and Buffalo are amongst the most common manufacturers of NAS drives.  The initial cost may be high, but at some point, this option will actually end up being more economical since you are not perpetually paying for a monthly fee for storage space compared to public cloud services like the ones previously mentioned.

Hopefully, we have been able to shed some light on this topic of cloud storage.  As people store more and more data each year, the idea of where and how often it should be saved rarely comes to mind until a disaster has struck.  There is no real solution to the potential risk of losing one’s data, except to have multiple data backups.  Typically we suggest having two local backups and one off-site cloud service backup.  Only with this type of backup strategy can you truly lessen the need for data recovery solutions.